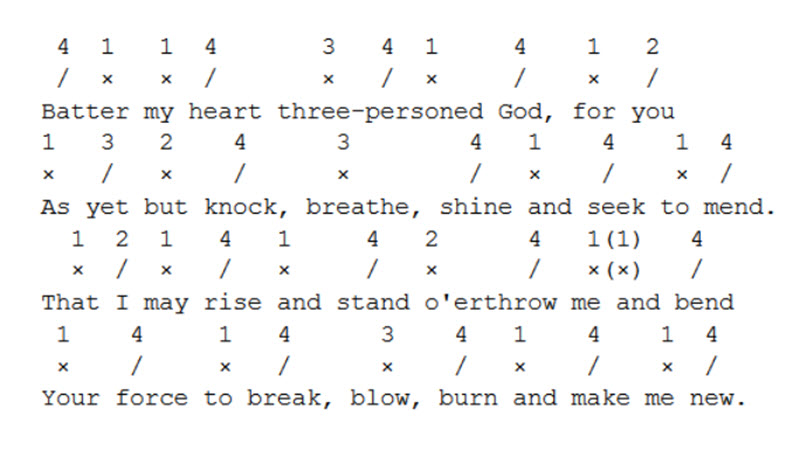 Some people’s biggest exposure to poetry is in nursery rhymes and things like, Roses are red, violets are blue . . . . Unless someone has taken poetry courses in high school or college, its unlikely he or she will know many useful poetry terms like meter, strophes, trochees, iambs or any of the other words used to describe the techniques and word constructions that are used to write a poem.

If you want to write poetry or you want to be a more careful reader of it, learning these terms will help.

Lets define some terms to help explain this one. Meter refers to the pattern of syllables in a line of poetry or even an essay.

The most basic unit of measure in a poem is the syllable and the pattern of syllables in a line, from stressed to unstressed or vice versa.

This is the meter.

Syllables are paired two and three at a time, depending on the stresses in the sentence.

Two syllables together, or three if its a three-syllable construction, is known as a foot.

So in a line of poetry the iamb would be considered one foot. Because when you say the words, the is unstressed and iamb is stressed, it can be represented as da DUM.

An unstressed/stressed foot is known as an iamb. Thats where the term iambic comes from.

Or said in another way:

Languages possess inherent rhythms resulting from the interplay of the unstressed and stressed syllables as well as contrast between short and long vowel sounds. In the English language, the rhythms are typically analyzed in the context of a verse, whereby the language’s rhythm usually manifests itself in formal patterns, which can be categorized along 2 separate lines. 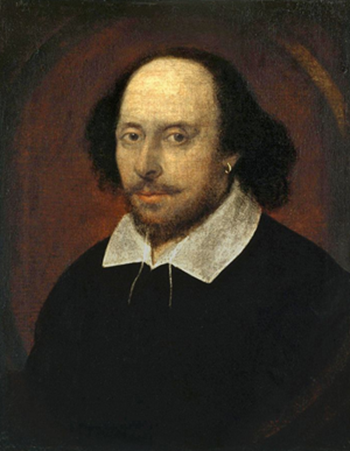 The first category is on the basis of the pattern on unstressed and stressed syllable in each line, where “feet” is the term given to the groupings of the syllables.

“Iambic” is a term used to refer to a particular type of foot, which is an unstressed syllable that is followed by a stressed syllable, as is the case in the word “compare”.

The concept of the iambic meter traces its origins back to classical Latin and Greek poetry, where it is defined by the alteration of short and long syllables.

Besides the pattern on unstressed and stressed syllables, lines of verse typically have specific lengths. The lengths are expressed as the feet or number of pairs in a particular line. Lines that have five feet are essentially written in “pentameter”.

Iambic pentameter therefore refers to a line with 5 pairs of syllables, where each of the pairs is an iamb that is comprised of a stressed syllable, which is then followed by an unstressed syllable. It is not a must for the syllables to be paired within a particular word, but it can be comprised of 2 words because the English language’s natural inflection is still able to define an iambic rhythm.

“Shall I compare thee to a summer’s day?
You are more lovely and more temperate:
These famous lines naturally fall into iambic pentameter. It is not a must for iambic pentameter to be part of the verse that rhymes. It can serve equally well in blank verse characterized by having a rhythmic meter in the absence of rhyme, as this excerpt from Robert Frost’s “Birches” shows:
When I see birches bend to left and right
Across the line of straighter dark trees,
I like to think some boy’s been swinging them.
But swinging doesn’t bend them down to stay.
While iambic pentameter’s structure is properly defined, it does not mean that it cannot either be mixed with other schemes or varied. In some cases, this departure from strict form has a significant contribution to the effect as is clearly evidenced in “Birches”. After the 4 iambic lines that follow strict iambic form, Frost continues:
Ice-storms do that. Often you must have seen them
Loaded with ice sunny winter morning
After a rain
The break in the formal scheme of the poem, which is caused by the simple declaration that “ice-storms do that” brings attention to that simple statement, whether it is considered by the reader as a simple matter-of-fact aside or a dramatic effect by the poet.

Besides allowing variations from the canonical form, whether a given line is actually written in iambic pentameter is often open to interpretation. For example, the line that is probably the most famous from Shakespeare’s most famous soliloquy that Hamlet delivers:

To be, or not to be: that is the question.
The speech clearly opens in iambic pentameter where stresses are one the 2nd, 4th, and 6th words. However, the next two words can be read in a manner of ways, by stressing either “is” or “that” but this will depend on the preference of the reader. The more popular and traditional approach is seemingly placing emphasis on “that”, which basically departs from iambic pentameter. Emphasizing “is” has the effect of retaining the lamb.

It is obviously impossible to term one reading correct while calling the other incorrect. At the very least, it is clear than the different readings create different effects, which are further enhanced by the treatment of the words in the rhythmic flow of the line.

The famous line from Shakespeare further illustrates a different variation since it contains eleven syllables. The departure from canon is relatively common among different variations where lines end in a last but unstressed syllable, which is referred to as a feminine ending.

It is generally accepted that iambic pentameter became the dominant form in English poetry after Chaucer, even though Chaucer might have written more in iambic pentameter than is immediately apparent to later readers.

After his death in 1400, changes in pronunciation rendered a final letter “e” after the word silent, and there is reason to believe that Chaucer actually intended for the letters to be pronounced.

The tetrameter contains 8-syllable, 4-line beats, iambic or otherwise. Tetrameter is the form popularly used in nursery rhymes and matching cadences. It imposes a very regular rhythm, which might be a limitation in itself.

Iambic pentameter offers a less rigid as well as more natural flow that is able to approximate natural English speech better. However, this does not imply that the English language is naturally spoken in iambic pentameter, but it could be that the form is better able to accommodate the intonation and pace of the language smoothly while still allowing for the underlying form to be heard clearly.

Great examples of a iambic pentameter poems would be many of Shakespeares sonnets. He often wrote sonnets and whole lines of dialogue from plays in this meter.

It can help to understand the other forms of feet and meter that are used in poetry. These are all determined by the stressing pattern.

Understanding the rhythm of poetry and how to read a line to determine whether iambic pentameter or some other meter is used can help you learn to write your own poetry and better appreciate the writings of classic and modern poets.

Iambic pentameter is only one of the many forms of poetry structure, and has been popular for centuries; yet, sometimes people still ask, what is iambic pentameter?

Iambic pentameter consists of alternating five pairs of stressed and unstressed syllables and each line features ten syllables. Blank verse is the un-rhymed form of this structure and is the English language’s most commonly used metrical pattern in poems.

Iambic pentameter examples are one of the best ways to explain this particular form of poetry.

The most famous example comes in the works of William Shakespeare who frequently used this particular structure in his work.

Interestingly, this form was mostly used for characters in the upper classes, leaving his lower class characters to speak in prose. Such a dynamic gives an idea to the weight given to the iambic form.

Of course iambic pentameter is not the only high-brow form of poetry. The petrarchan sonnet, or Italian sonnet, named for its developer Frances Petrarch has been revered for centuries as the oldest form of sonnet.

Even though the sonnet typically uses iambic pentameter, it also includes other forms such as tetrameter and hexameter. The Italian sonnet is actually divided into two sections: the octave and sestet. The octave is the first eight lines consisting of an “1 2 1 1 1 2 2 1” rhyme scheme.

Free verse tends to break all these conventions leaving boundaries set by any metrical form behind. Although free verse may have its own distinct rhythm, it does not need to rhyme or follow any particular stress patterns.

Even with this throwing away of convention, free verse poetry can have distinct cadences and rhythms depending on the poet’s personal style.

Poetic rhythm can range from a lyric poem to a Spenserian sonnet. Poetic styles need not be as restrictive as an iambic form as long as the poetic structure is true to its writer’s vision and is original.

Poetry in any form should be expressive and take its readers into a different realm of experience.

Check Out These Related posts: